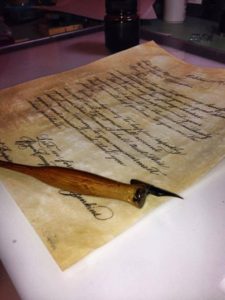 Getting a letter from home brightens the day of any service member stationed overseas. But one North Carolina man wouldn’t settle for anything ordinary. He wanted a letter to look as if it had been written in the 1800s during the time of the Crimean War, so he enlisted the services of The Oblique Pen in Cary, North Carolina. Ryan Covington-Grey Jenkins contacted The Oblique Pen artist Jessica Yee with an unusual request: transcribe a 19th-century-style military dispatch onto parchment for his friend, a captain in the U.S. Air Force, who was stationed in Afghanistan.

“It is written so that only someone who is a student of British history would understand it,” Jessica said. The calfskin parchment used for the project ensures the unique document will become an heirloom for the captain’s descendants.

Addressed to the “Field Marshal” and wishing his friend to return “posthaste,” the “brother-to-brother” letter captures the flavor of 19th century English and served as a bit of an inside joke for the pair, who are both British history scholars and experts in the Crimean War. Ryan recently reported that his friend, Benjamin Secrist, has returned to the U.S. and proudly displays the letter on his desk.

Although the 19th century military dispatch was a first for The Oblique Pen, clients often choose parchment for other important family documents. One of the most popular items is a wedding story book. Hand-lettered in beautiful calligraphy on sturdy parchment, the book tells a couple’s love story: how they met and fell in love, details about their wedding day, and background genealogical information about their families. The Oblique Pen collaborates with Wedding Story Writer owner Michelle McMurray de Luces, a professional wedding story writer, who gathers all the details to create a cherished book for a newly married couple.

When you want to mark your life’s most important moments with parchment documents, contact The Oblique Pen for a consultation to determine the best design for your project and budget.

(Editor’s Note: This is a wonderfully humbling  story to share as we continue to thank our brave armed forces around the world!)

This post about calligraphy services in the Triangle NC is brought to you by The Oblique Pen in Apex NC!

We are found easily across social media: