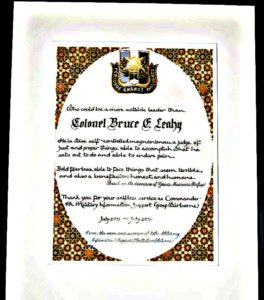 An outstanding veteran of the United States Army recently received a very special gift handcrafted locally by the Triangle’s Oblique Pen calligraphy studio in Cary. At a special dinner ceremony, Colonel Bruce Leahy received a custom-designed commemorative certificate, which had been carefully placed into a custom frame for display and preservation in his honor.

“Colonel Bruce Leahy received the honor as a token of appreciation from the men and women of the 8th Military Information Support Battalion (Airborne) during an intimate dinner ceremony marking his successful completion of more than two years as the 4th Military Information Support Group (Airborne) Commander,” Lt. Colonel Brad Burris told The Oblique Pen in Cary, NC following the ceremony.

Oblique Pen calligrapher Jessica Yee received the commission for the document from Lt. Colonel Burris, the commanding officer of the 8th POB (A). The 9-inch by 12-inch sheepskin parchment bears a dedication to Colonel Leahy, a listing of his leadership qualities, and an expression of gratitude for his service to the group. All this was surrounded by a beautiful mosaic design inspired by Arabic art.

Lt. Colonel Burris requested that the document have Arabic or arabesque feel to it. In addition to the surrounding mosaic, the lettering was done in an authentic “Arabic” English style. The entire project took about 35 hours to complete, from original pencil sketch to final tooled and multi-level gold leaf applications. To complete the work, Apex Gallery Custom Framing floated the parchment in a frame behind glass so that the gold leaf remains away from the glass.

“I can say that he was suitably impressed and thanked us for the thoughtfulness of the gift,” Captain Isaac Johnson told The Oblique Pen in an e-mail.

The media used to create this one-of-a-kind document included: sumi ink, paint gouache, and gold leaf. The durable parchment and custom framing ensure that Leahy’s presentation will remain as bright and vibrant as the day he received it; even a hundred years from now.

The Oblique Pen has completed other unique commissions that celebrate friendship, anniversaries, weddings, and other moments of life. Remember that memories become treasure that last forever with the talents of artist and calligrapher, Jessica Yee. Preserve your special moment.

We also thank all of the United States Army Special Operations Command for all they do to protect and serve and keep us free!

This post about calligraphy services in the Triangle NC is brought to you by The Oblique Pen in Apex NC!

We are found easily across social media: